The events in this short tale take place immediately after the story Indomitable.


Nobody was more surprised than Theodore when an envelope was delivered to his home in Mayberry. He could count with one hand the number of times he had received mail. Seeing the Air Sea Brigade seal on the envelope gave him a start. Thankfully, his mother was at work, otherwise she would be asking for an explanation. The only other occasion he had any dealings with the Brigade, was when he illegally stowed aboard one of their airships. Was this envelope related to that incident?

Theodore ripped open the envelope and breathed a sigh of relief. It was just an invitation, but not just any invitation. It was a gold embossed invitation to a state funeral.

You are hereby invited to the memorial service of Sir William Kane, Captain. 1802-1877.

Besides his rank, the invitation listed Captain Kane’s military commendations and offered a short biography. Kane had been knighted by Harold II, had won nearly every medal possible and was the “Hero of Deepwater Bay.” Teddy recalled his history lessons about how Captain Kane, commanding the airship Reliant, had almost singlehandedly divided the pirate fleet at Deepwater Bay and cut them to pieces. An oversized portrait of Captain Kane, with his long  black hair and cutlass aboard his airship, hung in the front lobby of the Gearford Museum of Art.

Theodore wondered how he had rated an invitation to Captain Kane’s memorial service. As he read Kane’s short biography, he recalled something his friend Willy had once told him, that history books were mostly “bullshit written by motherfuckers.” As he laughed at the memory, a sinking feeling suddenly overcame him.

With the invitation, he found a small envelope. It was addressed simply “Teddy.” Hands shaking, Theodore opened it and found a letter.

By now you’ve probably realized your old friend Willy, was William Kane. I hope you’re not too cross with me about keeping secrets.

Truth is, I much preferred being old Willy, than Captain William Kane. Being famous is fucking overrated. Not long after we first met, I learned I was dying. Sharing old stories with you and talking about flying was the best thing that happened to me for a long time. Didn’t want to spoil it. Hope you understand.

The letter went on and Theodore kept reading, but felt his legs weaken. When they met, he had thought that Willy was just an old retired common seaman. Despite their many differences, they had become fast friends. When Theodore was at his lowest ebb, as the result of crippling accident, he rediscovered life in large part because of his friendship with Willy. Then two months ago, Willy had given him the adventure of a lifetime, when together they improbably stowed aboard a Falcon class airship. At the time, Theodore thought it a miracle that they had gotten away with it. Now Theodore realized it was no miracle.

Not long after their escapade, Willy seemingly vanished. Despite all of his efforts, Theodore was unable to find his friend. Now, everything made sense.

At the bottom of Willy’s letter was a final note. . .

Although I’m an unsentimental old bastard, thanks for being a good friend to me. You gave me one last adventure. Keep trying to fly.

PS. Thought you’d enjoy the wings. You earned them!

PPS. Got you the invite to my funeral. The service will likely be bullshit, but figured you might enjoy the cannons firing and the fucking spectacle.

Turning over the envelope a set of silver airship wings fell out. These were Willy’s flight wings, the one’s he always wore on his jacket. Theodore fingered them. and as the tears came, he pinned the wings on his own vest. 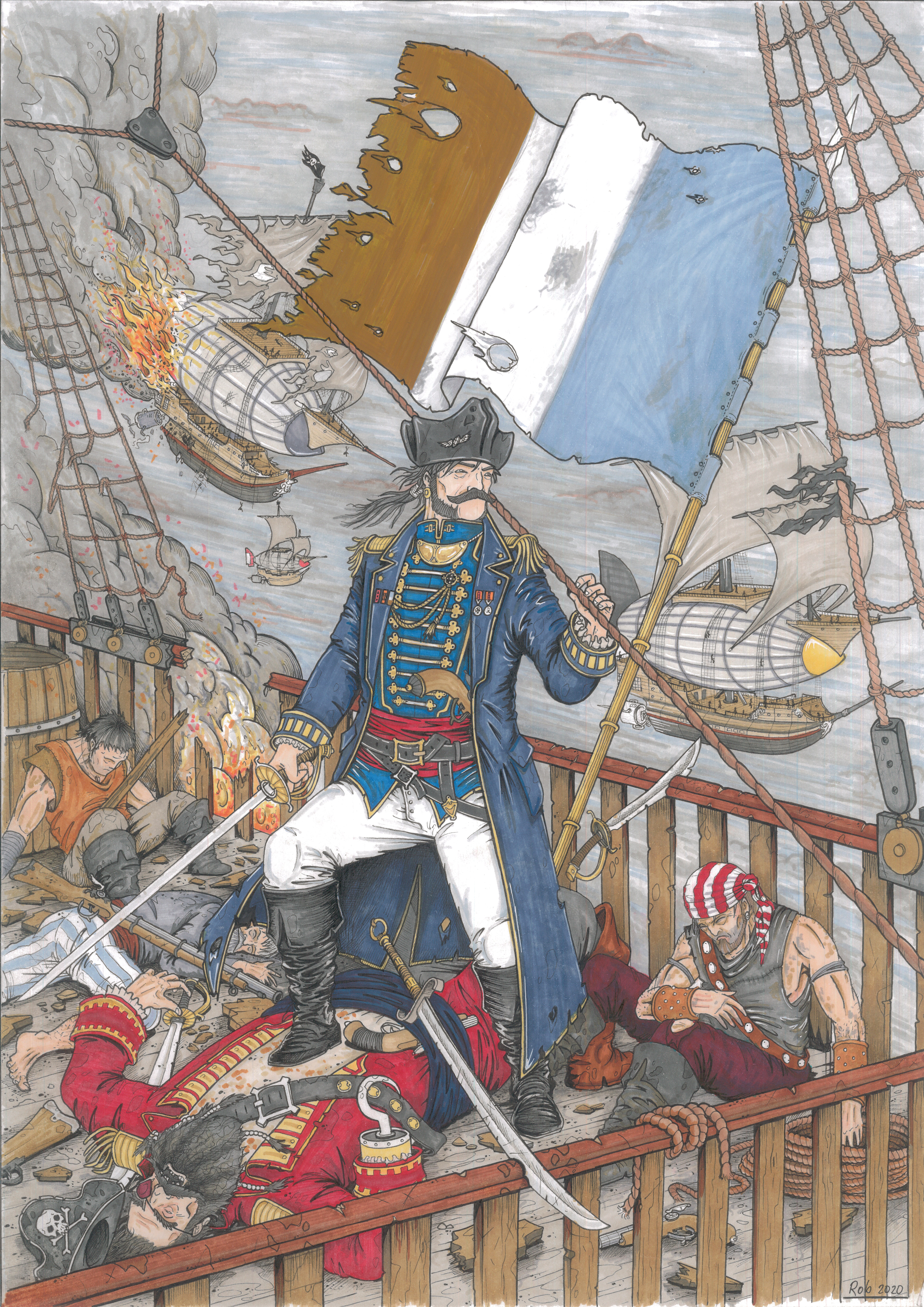