Theodore Emelior Beem had always been a respectable and proper neighbor who largely kept to himself. A librarian, Theodore lived with his cat in a ramshackle two story house in the Mayberry District of Gearford. Then, five years ago, something happened…

If you asked Theodore’s neighbor, Eleanor Winslet, when things began to change, she’d tell you it all started when the large wagon pulled up to the Beem house.  All manner of scrap and garbage was offloaded and carried into her neighbor’s home.

Upset that her morning repose was being disturbed,  Eleanor peered over her flower bushes and offered a menacing stare that a wiser man would have taken as a warning. Instead, when Theodore saw his neighbor, he waved affably and resumed the task of guiding the men with the wheel-barrows into his home. From that day forward, a constant cacophony of clatter and noise emanated from Theodore's home and this often continued late into the evening.

“He is ruining the neighborhood,” remarked Eleanor.

“This is Mayberry dear,” answered Henry, from behind his newspaper, “I don’t think it’s possible for him to ‘ruin’ the neighborhood.”

“All the same Henry, I will find out what kind of mischief is afoot.”

With a sigh and a nod, Henry returned to his paper, knowing his wife was not one to leave things alone. From that day forward, Eleanor became something of an amateur detective, following Theodore to the junk shops, to the mercantile store and to the industrial waste center. Far from being bothered that his actions had aroused the curiosity of his neighbor, Theodore waved and smiled when he caught sight of Eleanor and this only infuriated her more.

“I tell you Henry,” remarked Eleanor over breakfast, “That young man is up to something. We should report him. I’m sure the technocrats would take an interest.”

“Now Eleanor,” said Henry drolly, “Be reasonable. The young man is just a librarian. What possible mischief could he be up to?”

It was not long after that Eleanor began to see a number of the local street urchins drop things off at the Beem home. What could they be doing? It was hard to say, but Eleanor could have sworn she saw money change hands.

This continued for almost five years and Eleanor was no closer to discovering Theodore’s secret. Finally, on an otherwise quiet Mohday evening, at the beginning of Andrad, when the leaves had just begun to turn, a tremendous explosion shook the neighborhood. Still in her night dress, Eleanor dashed down the stairs with Henry in tow, and ran out into the street. They both looked in awe at the Beem home, or what was left of it, since much of the roof was no longer there. A cloud of smoke billowed over the house, and as it began to dissipate, Eleanor saw a form take shape.

One of the most beautiful airships they'd ever seen rose from the rubble of the Beem house and through the remnants of the roof. It cut a fine shape, with its red and yellow piping. The figure in the cockpit was unmistakably Theodore Emelior Beem, but with a ridiculous hat, a set of goggles atop his head and his cat poking out her head alongside him. The neighborhood looked to the sky in stunned silence and above them rose a triumphant voice. 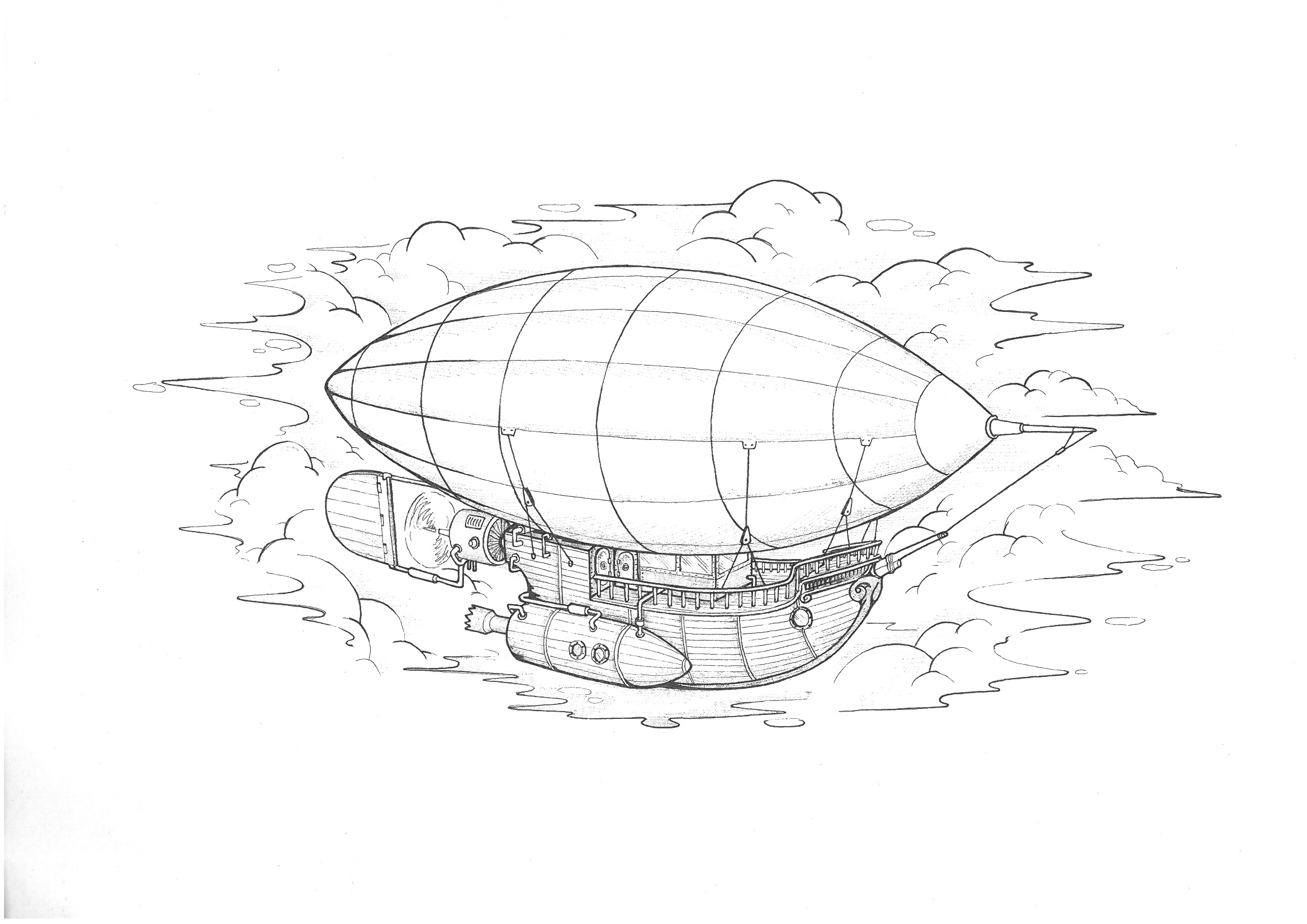 “Excelsior! I did it!,” yelled Theodore with an upraised fist, as his airship flew into the horizon.

"No, he's brilliant, he is," whispered Henry even more quietly.

After that day, things were never quite as sleepy, in that sleepy neighborhood of Mayberry and no longer would Theodore Emelior Beem be known as “just a librarian.”

This story is continued in "A Constable's Dilemma."

Illustration of the Excelsior by Bert Wallbank. Copyright 2019