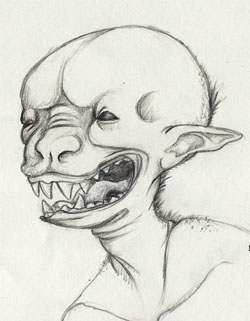 Measuring on average three feet, Goblins stand on all fours, half upright. Prone to knuckle walking, Goblins carry most of their weight on the knuckles of their large hands. Goblins have shown very limited skill of walking upright on their back legs over long periods of time. The hands, equipped with broad knuckles for balancing weight, are thickly webbed with long protruding fingers armed with rough claw-like nails. The hands consist of 10 digits, five on each hand, including four fingers and one thumb, which while opposable, is very limited in range of motion. A goblin’s feet are very similar, displaying a sort of thumb, though not nearly as dexterous as it’s primary digits. Goblins boast strong and sinewy bodies regardless of sex. As an effect of mostly subterranean life, the race on first sight seems sallow and sickly. Facial features exhibit dog-like features with a protruding snout, heavy brows, and sharp teeth. Skin color varies from almost transparent in the young, to a rotten earth colored grey. Soft vellous hair covers the back of the head to the base of the spine, otherwise the race is hairless. goblins maintain a long partially prehensile tail that commonly hangs limp and scaled behind them. Speculations have been made of the use of this extra appendage including it’s use societal rank, it’s use as a pheromone marker, and also an aid in mating. All of these speculations have neither been confirmed or disproven.

Noted to be mostly carnivorous scavengers, although goblins have been spotted sustaining their colonies off of plant matter within their territories while carrion is scarce. In times of famine, they are known to send parties to hunt down living prey. This prey includes larger predators such as; humans, stray demons, as well as adult Scuttlekovy, of which they have an unexplained tolerance. Goblins have demonstrated fierce cannibalism of sick or injured brethren.

Natural burrowers, the race uses their large hands as a sort of shovel, creating mass networks of tunnels far beneath the ground. It is undetermined how large these networks can span as goblins tend to be quite territorial and will swarm intruders of their colony. Hives range from hundreds to thousands of members, depending on complexity and the number of queens in each hive. Goblin communication is more intricate than ever thought before, as there are several confirmed accounts of hives merging to create super-hives of multiple gene pools.

The Goblin race consists of three genders. Males and females are almost indistinguishable at first sight as the female sexual organs protrude from the body similar to the male sexual organs. The two common genders reproduce with the third, which is used as a birthing vessel that the entire colony supports. This third gender is often referred to as a queen. The entire colony revolves around the third gender as evidence of dead hives has shown that the colony will collapse without the presence of one. Larger or unified colonies are generally supported by multiple queens, though it is still undocumented how these larger colonies work.