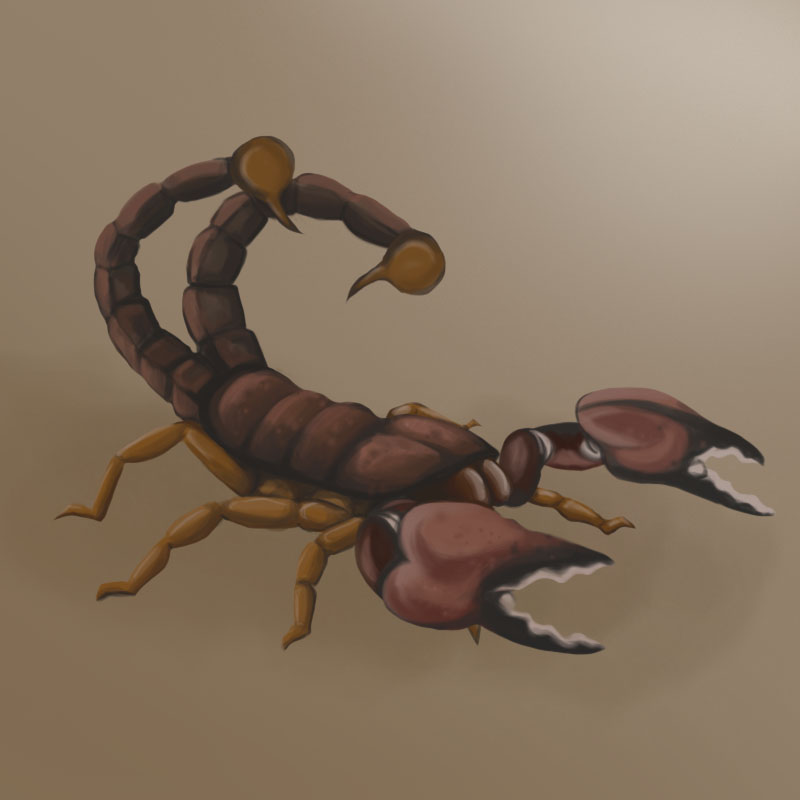 A type of arachnid, the Arazian scorpion has two large claws, eight legs, and two tails that end in stingers. Their carapace is armored, which becomes harder and thicker as it ages. The largest scorpion in record was found to be 48 inches in length, however, the average length is between five and eight inches. They are sexually dimorphic, with males being significantly larger than females. Very large specimens are quite rare due to their increased hostility and territorial behavior as they age. Arazian scorpions have not been known to die from old age and this hardy arachnid is theorized to grow indefinitely. Older scorpions will leave the safety of burrows to attack large prey or fight off other scorpions, which frequently leaves them vulnerable to larger predators, such as skuttlekovy, birds, goblins, and even humans. Larger scorpions are considered to be a prize to Human and Vibranni alike, due to their rarity.

The Arazian scorpion's diet consists of small insects and bugs. As they get older, these scorpions have been known to kill small rodents and even take small birds and other animals. It is often said that the largest scorpions prey on skuttlekovy, small goblins, and invade homes to eat cats, dogs, or other family pets.

Young scorpions are communal and will gang up on nests and small animals. After their first year, they break from the commune to compete for mates. After the second year, males will have settled in a nest with between one and three females, though it is not uncommon to find a nest with five or more. After three years, females will break from the group to seek out males. When males are in their fifth year, and females are in their sixth, they leave their nest and begin to patrol their territory and expand their hunting grounds.

After one year, the scorpions begin to become fertile. Males reach their peak at the end of their second year, while females reach theirs at the end of their third year. Females do not lay eggs and will typically birth between ten and twenty young, twice per year. After the four years, male scorpions become infertile. After six years, female scorpions lose the ability mate. When they lose their ability to mate, they are replaced with younger, more fertile scorpions.

Naturally the Arazian scorpion is not dangerously poisonous. Captive bred scorpions have been found to lack the toxicity of their wild brothers. Each subspecies is known for eating poisonous prey. It is believed this is how they build up their immunity to poisons as well as gain more potency in their venom.

Jungle scorpions are considered to be the most beautiful of the subspecies of the Arazian Scorpion. Living in the jungles and forests of Southern Araz, they gain toxicity by preying on poisonous frogs in their adult life. Jungle scorpions are commonly larger than their desert counterparts partially due to the amount of shelter provided in jungles. They are more vibrant than the other subspecies, usually found in red or green, though rarely can be found in blue.

Rock scorpions are only found in the mountain ranges in Araz. Often found in caves and tunnels deep in mountains, this scorpion has larger claws for burrowing and digging through rocks. Northern rock scorpions are more toxic than their southern counterparts, though their toxicity is mild when compared to the other subspecies and they rely on their strong claws to catch their prey. The southern rock scorpion is the largest of the subspecies of Arazian Scorpion. These scorpions have a longer procreation cycle, and typically live years longer then any other subspecies of Arazian Scorpion. They are often darker in color and are usually black, brown, or grey.