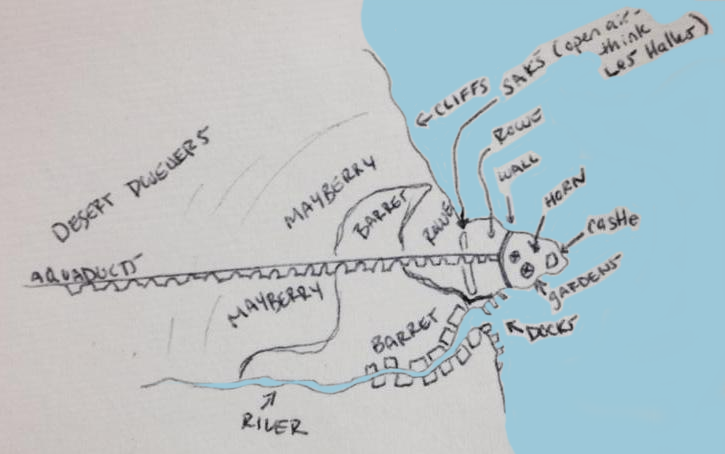 The capitol of Antiford. It is a bustling metropolis home to hundreds of thousands of citizens.

The city is just north of Argenstrath across the Vlazhny river which leads out to the Fimbrian ocean.

The settlement of "Optilocus" was the first in the region of Pavostanni. When Antiford was officially founded when the nation officially founded, a large castle was built on the coast for the royalty to lead from.

After the Technocrat revolution, the Technocratic council enacted a series of cultural reforms, one of which being the renaming of the city to "Gearford".

Gearford is broken up into five distinct districts.

This is where foreign dignitaries, government offices, and the Technocratic Council reside.

The wealthy section outside of the Horn District.

This is where the mills and many of their employees reside.

These slums are home to the poorest workers as well as the Vibranni ghetto.

The city's industrial waste is handled by the GIWC.

The Royal Academy is in the heart of the Horn District, while the Military Academy is northwest of the city limits.

The Grand Theatre is a cultural staple within the Rowe district. The Black Leaf and Earl is a well-known restaurant in the Barret district.

Gambling can be found at the Kovy's Nest in the Mayberry district.

No junk store is more aptly named than "Things" in the Saks district.

The Buford Automaton Company has manufacturing facilities in the Barret District. Their rival, Cerrilius Industries has offices nearby.

Rival newspapers, the Gearford Gazette and the Ticking Clock both reside in the city.

The largest employer in the city outside of government is the state-managed titan, the Gearford Mills.