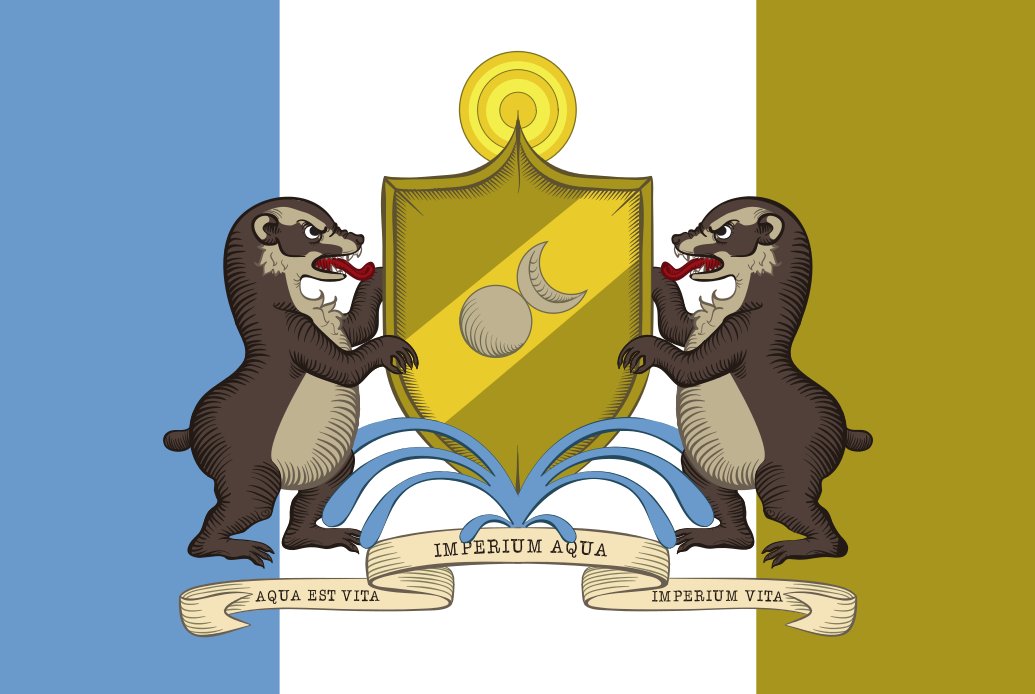 Antiford is a diverse and oddly improbable country. The majority of the country is desert, which the massive system of aqueducts and moisture farming helps alleviate. The country was founded by human settlers who journeyed southwest from Paorr.

Antiford is located on the continent of Araz and makes up a large portion of the land between the mountains and canyon. It's capital city, Gearford is on the coast of the Fimbrian Ocean.

The Hoganmar Mountain Range separates it from its northern neighbor Titania, While the Prodigious Canyon separates it from the Prush Empire to the south. Its western border of the country is undefined as it stretches into the Istoki desert.

The majority of Antiford is a hot desert climate characterized by aridness and high temperatures. There is usually a very short rainy season, lasting only a few months, with little actual precipitation.

The country was founded in 1658, some time after human settlers arrived from Paorr. They were not the first to inhabit this desert land, however, as Vibranni (mostly Pavostanni, also known as the Red Tribe) have existed in Antiford long before it’s founding. Decades later, in 1694 a monarchy was firmly established as the ruling body of Antiford.

Antiford’s recent history has been riddled with conflict. In 1879, a war between Antiford and the Prush Empire broke out. Shortly after, in 1882, the Antiford Revolution broke out, ending the established government and in its wake becoming a nation led by a Technocracy, led by the Technocratic council.

A majority of Antiford’s populace is concentrated in the east, in metropolitan areas like Gearford, Argenstrath, and White Haven. The population is mostly human, with a substantial number of Vibranni also living there. There are also many Yeti who live in Antiford, but they make up a relatively small percentage of the population.

The majority of Antifordians do not practice any form of structured religion, however there are those who follow a form of the polytheistic religion originating in Ancient Paorr. On Paorr the followers of this religion were called Oephelian. Members of the more modern sect established on Araz are known as Fjordan, though colloquially they are called Water Worshippers.

The closer you get to the capital city, the more the pressure from the technocratic government to have national pride is felt. In Gearford, unpatriotic attitudes are kept generally private. The city White Haven, however, brazenly clashes with the national government, though they are generally proud of their country.

There are many minerals and metals which are mined in Antiford, though Goblin colonies make obtaining these resources dangerous. Its glass and various technological industries are also highly regarded. There are large numbers of mills in Antiford, as the number one export for the country is textiles. The fabrics and clothing of Antiford are generally regarded as the best on Orr.

Agricultural goods (crops and livestock) are grown using the elaborate system of aqueducts that extend from White Haven to Gearford as well as moisture farming techniques.

Likely in part due to the implementation of a technocratic leadership and development of steam-power like Asymr, Antiford has an economy based largely in industrial enterprises. In Antiford this means textile goods as well as locomotives and aircrafts as well as other types of motorized vehicles. There is also a substantial weapons industry. They are the world's largest exporter of automatons. A large number of Antiford’s workforce is employed for manufacturing and shipment of these industrial goods.

Technological advances in Antiford are similar to those on Paorr or in Titania, including: Steam power, aqueducts, industrial machinery, oil/gas lighting, combustion engines, medical equipment, firearms and weapons technology, etc.

See the articles on the national government and metropolitan government.

This is where we began to design Orr.
Most of our stories will take place here, though don't be discouraged to branch out to other places on Orr.