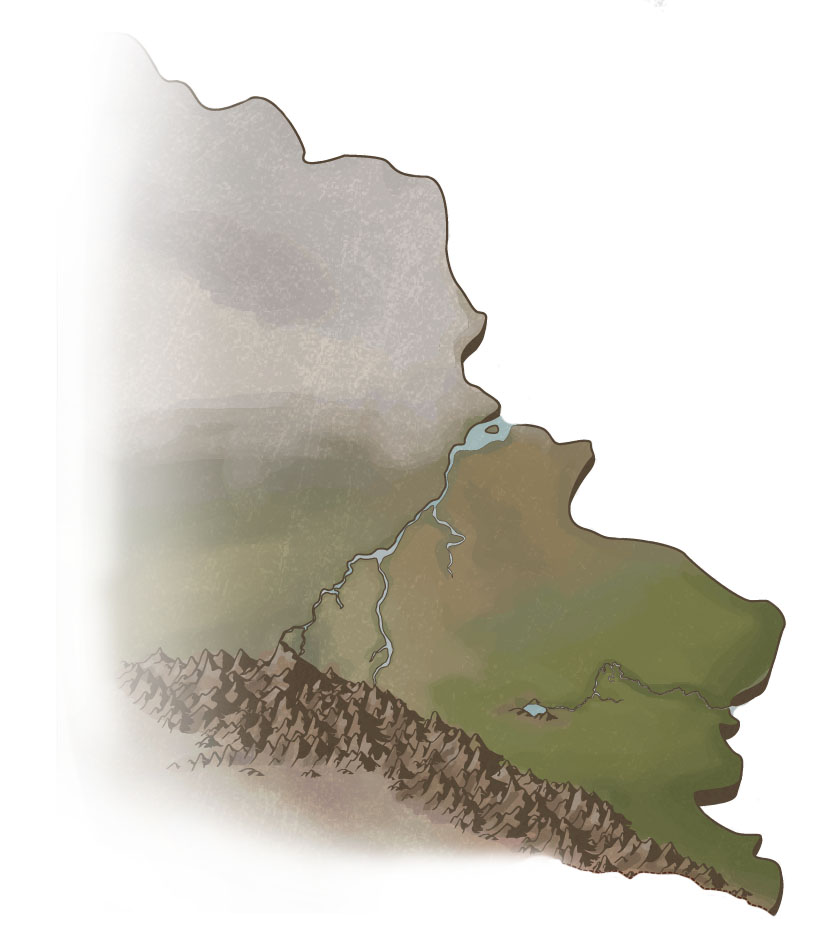 Titania is the largest country on Araz by total area, taking up the entire land mass north of the mountains. The country is home to the world’s Yeti population, both the nomadic tribes and settled peoples. Titania is rich with natural resources, and is an important trade partner for Antiford and Paorr. While it has a war-riddled past, internally Titania has been a country at peace for centuries.

Titania is located in the northernmost part of continent, bordered by the Fimbrian Ocean to the east and the Hoganmar Mountains to the south. The climate is temperate throughout most of the southern and middle regions of Titania; north of the river, however, is mostly tundra.

Politically, the country is separated into seven prefectures, most of which are located south of the Raavngroft.

The unification of Titania is relatively new considering how long the Yeti culture has been present, and is generally considered a result of Humans immigrating to Araz and forming their own countries. The country was officially founded in the early 1657 as a loose confederation of kingdoms. In 1753, the kings, in response to growing tensions from the growing human communities, combined their land and appointed themselves The Elders.

Titania has a largely Yeti population, although there is also a substantial human population in the more urban areas. Overall population is approximately 6 million Yeti and 2.5 million humans. Most of the population is at the south, nearest to the Hoganmar Mountains and along the coastline, and becomes less dense as you travel north, although a few large cities do exist in the northern areas as well.

Most Yeti practice a form of ancestor worship. They do not directly worship those Gods which they believe are responsible for their creation. In most homes there is a small room or section of the home that serves as an altar to honor the Great ones who came before them.

The natural cycles of the world – solar, lunar, and seasonal – also play a large role in the religious practices of Titania. Mythology and folklore are deeply rooted in their relationship to the natural world and harvest cycles.

Afterlife is based on how honorable one has lived their life. Those who have acted with honor are admitted to Hallaer, those who have not travel to Vanaer.

All Titanian societies, settled or nomadic, have a strong sense of family and community. From an early age, citizens are encouraged (and in some cases required) to immerse themselves in the community through volunteer apprenticeships, scout programs, and attendance of important social gatherings and community events. It is uncommon, even in larger cities, for families to be unfamiliar with their neighbors and surrounding community.

The acceptance of strangers into the community, however, is not as universal. In many smaller towns, and especially in rural villages in the north, where winters are harsh and resources are more limited, it is difficult to be accepted into the community when you have no previous ties.

In the cities and towns with more forgiving climates, it is the opposite. There is a cultural attitude of gratam ildestaad (“free hearth”), meaning hospitality is held in very high regard, and one should never close their door on someone if it can be helped, for stranger and friend alike.

Titanians have a strong sense of loyalty to their country and pride in their traditions and culture. Many cities and even small towns have holidays to commemorate their founding, celebrated with food festivals and parades. Yeti communities in other countries also tend to strongly emphasize celebration of national and cultural Yeti holidays in order to preserve their cultural background abroad.

Forests and fresh water sources are a huge part of Titania’s landscape, and likewise their economy. They have thorough Forestry regulations and environmental policies to ensure the sustainable use and protection of these resources.

Ocean resources include: fish, crustaceans, and other seafood, as well as algae and whale oil.

There are also large mineral and metal deposits close to the mountains, including iron ore, copper, gold, and zinc, and coal. There are also petroleum/oil deposits in the far north by the sea, but the drilling technology to tap into this resource is still underdeveloped.

Also, because of the countries strong military focus, shipbuilding, and access to raw materials, they have developed advanced metallurgy and superior metals manufacturing, useful in civil engineering, construction of ships and naval vessels, mining/drilling technology, military vehicles, and weapons.

Titania was also a key player in the development of industrial use of hydraulics as well as navigation and naval equipment.

The economy in Titania is a developed export-oriented economy abetted by timber, hydropower, and various ores; these constitute the fundamental resources that facilitate an economy oriented toward foreign trade. Traditionally, the country has a largely agricultural economy, with a majority of the settled population’s workforce coming from farming and animal husbandry. As technology develops, oceanic engineering, large-scale mining, steel, and unrefined petroleum have become more formative to market and employment trends.

Titania also has a competitive mixed economy with wide-spread welfare for farmers in order to ensure stable returns from agricultural institutions regardless of outside constraints. This is largely financed through high tariffs for companies that choose to export their manufacturing or import natural resources that could be acquired internally. Approximately 85% of all resources and companies are privately owned, with 5% owned by the state and 10% operating as consumer/producer cooperatives.

Technological advances on Titania are similar to those on Paorr or in Antiford, including: Steam power, industrial machinery, oil/gas lighting, combustion engines, medical equipment, firearms and weapons technology, etc.

The University of Hjem is one of the largest research facilities for ocean studies and marine biology. Titania also the forerunner in animal husbandry/animal sciences, and environmental science.

The Council is the executive branch of the country, and consists of seven appointed by their individual communities to make ruling decisions. Many are already community leaders and members of the military or involved in other civil service, which is highly regarded among Titanian society. All citizens, including the nomadic population, fall under the laws of the council.

Prefectures form the primary level of judicial and administrative division in Titania, directly below the Council influence. For each prefecture, an official is elected by votes from City officials within their prefecture. City leaders are elected by popular vote.

In Titania, there is a dominant belief in neutral rights, meaning that political conflicts between nations should not interrupt freedom of the seas or other major trade routes.

For international conflict and foreign civil affairs, Titania remains neutral unless directly affected or if their treaties with ally countries require military or diplomatic assistance. Treaties and similar official agreements are highly venerated by Titanian government.

They also give fair recognition to de facto governments in the aftermath of foreign civil wars (the Technocratic Council, for example, after the Antifordian Revolution).

Due to their naturally isolating borders and abundant resources, Titania is isolationist. Though there have been movements in the past to expand and become an empire, but these movements were not popular and therefore did not come to fruition.