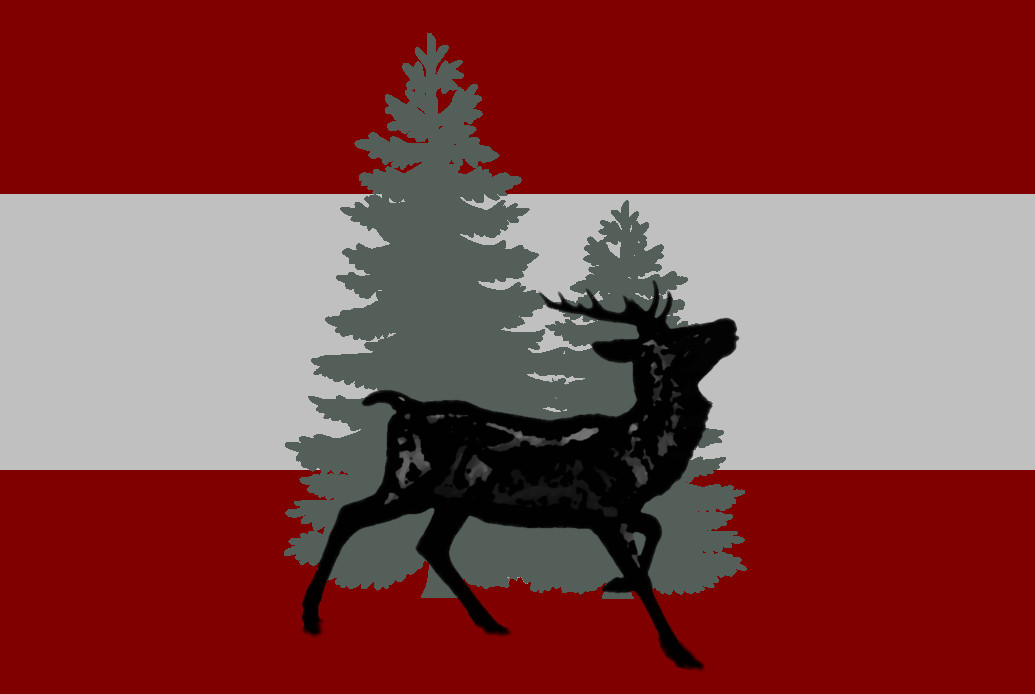 Kuu is an island nation and the northernmost country of the Paorrian continent.

The coasts here are more often lined with fjords. The mountains are taller and full of snow.

There are a great deal of lakes, rivers, and other features. Towns are more remote up here.

The Tenja road connects all the major cities from Hiemskôg to Baerú. There are many deep forests, valleys, and fields here. The coast is flatter and during Oforand the ocean breezes can be warm.

It is extremely popular for women to wear antler headdresses. The rich may have antlers surgically implanted - that unscrew to remove at nights. There are heroic operas that feature heroes with antlers on their helmets, even though no military of Kuu have ever used such adornments in combat.

The tribal folk of Kuu are more likely found up north. These peoples are far more adherent to the old traditions and are more religious.

They are simpler folk, living off the land as hunter-gatherers or small-scale agricultural people.

The urban centers in the south have a strong focus on art, museums, opera, and orchestra music.

The people here are mostly secular, treating the stag symbolism as their cultural heritage more than reverence to a god.

In Aderfod, the people in the south-west like to celebrate all the berries with pies, such as the Early Aderfod Berry pie.

The city of Villisveppa (also spelled, VillisVeppa) stands as the cultural clash of two older cities, Villis of the north and Veppa of the south, divided by the Mús River.

The first wave of common ancestor between yeti and human that came from Araz travelled to Kuu and became the Blaar tribe. Much later, another migration from Araz brought the people who would become the Raou tribe to the island.

Some Raou and some humans who emigrated back to Kuu from continental Paorr make up the southern, modern population.

The tribal peoples of Kuu revered the stag deity, Ofandyr. The story goes that the never realm between life and death where horrible beasts roam. Ofandyr guides and protects the people who pass into death and holds the beasts back from entering the sacred land of living.

In the 10th century, Bjork Geovikk founded a sect known today as Geovikkan who have specific descriptions of the beasts in the otherworld and worship them instead. They treat Ofandyr as a misguided antagonist who holds back their masters.

While the northerners are strong believers of Ofandyrism, in the south, it’s much less organized, though still celebrated. Geovikkans however are equally fanatical in both the north and the south, being more political in the south.

There are fishing industries that fuel both tourism on the middle of the country, and more commercial ventures that power the capital of Hiemskôg.

There are world-renowned surgical facilities at the hospitals of Villisveppa.

Fallinbannao’s economy is fueled by both the artist community and Buford Automaton’s Paorrian operations and manufacturing. These automatons are some of the nation’s few exports along with raw materials and furs for other nation’s textiles.

There are small farms all around the country and a small native alcohol scene.

The nation’s parliament is situated within Hiemskôg and the ancient castle where the Queen resides is just on outskirts of it.

The nation’s had been run exclusively by the King until the people demanded a role in their government.

There is a political group against national government named Hvasst Skreta with strong ties to the Geovikkan culture.

Today, the monarch, Queen Hanna Dahlberg works with the parliament to oversee the needs of the people of Kuu, diverse as they may be.

Kuu takes inspiration from Iceland, but tries to come across as more densely featured, geographically.
The verticality is uniquely imagined to help differentiate them from the icey nations in Araz.